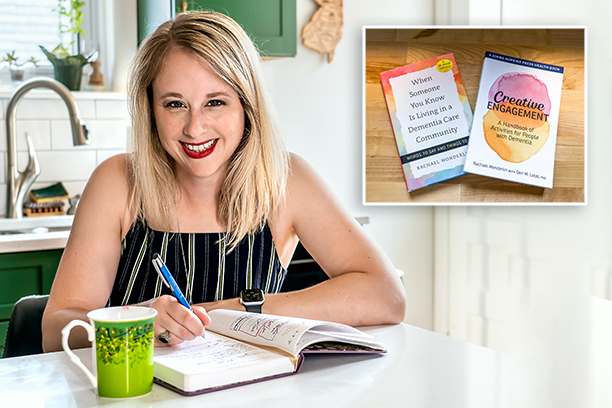 As part of this partnership, Rachael will hold an event at Brookridge on Thursday, March 24 from 4 – 5:30 p.m. The topic is “What Do I Say When…” How to Avoid Arguing with a Person Living with Dementia.” It will be an interactive event. Rachael enjoys fielding questions and being able to provide an answer that probably about 90 percent of the people in attendance have.

“Our residents living with dementia and their families depend on our expertise and knowledge to enhance their lives. Rachael and her team are going to give us that ability, and becoming excellent in our approach with older adults experiencing cognitive loss is one of Baptist Retirement Homes’ strategic initiatives. Rachael’s proven track record and hands-on approach is exactly what we need to take our abilities to the next level,” said Reed VanderSlik, president and CEO of Baptist Retirement Homes of North Carolina.

Rachael listed her key takeaways for the upcoming event:

– I want every single family member who comes to walk away with tangible solutions for their dementia care communication. I want to help them with what they can actually do to improve their communication.

– I want to help people alleviate the guilt and stress and burnout associated with being a caregiver. They can look around the room and see people who are in the same boat or in a one very similar.

– I also want to be able to meet with BRH team, meet the families, learn more about Baptist Retirement Homes of North Carolina and help them stand out in the market as we are building a dementia care program.

Before founding Dementia by Day in 2014, Rachael worked at a number of senior living communities as a dementia care program coordinator or director. She also said she knew at a very young age she wanted to work in aging. “I always loved working with older adults.”

Her first job was at Brookdale in Burlington, North Carolina as dementia care program coordinator. While there she started sharing stories about her day in dementia care. She said, “People were like you need you turn this into a book. The blog eventually became my first book.”

“Burlington was really where I started to figure it out. I did an internship at Penn Memory Center in Philadelphia,” Rachael said. “Brookdale was the first time I was spending all day, every day in dementia care. That really confirmed for me that this is what I wanted to be doing.”

She also earned her master’s in gerontology from UNC-Greensboro and has a connection to North Carolina with that experience and her time at Brookdale in Burlington.

Rachael works with companies like Baptist Retirement Homes of North Carolina for six to 12 months or longer to build dementia care programs unique to them. She works with the team members, trains the staff and holds workshops. She also has an online educational program ready to go that takes about five hours to complete. There is a family portal in the works that will allow families to take advantage of her information and advice.

The Brookridge event on March 24 is about dementia care communication and she hopes people will come prepared for a healthy, interactive dialogue.

“I start writing down questions on the white board. Most of the questions are ones a lot of people will want to know the answers to,” Rachael said. “Not everybody living with dementia has a memory problem. We’re enabling people to live safely and happily later in life. Taking a lot of burden off caregivers.”