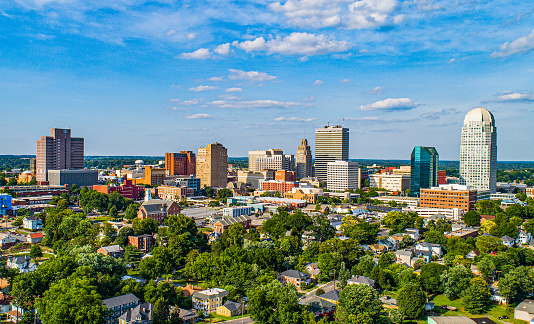 Cities that seamlessly combine history and modernity are some of the most interesting places in the world, and Winston-Salem, North Carolina, is no exception. The city not only impressively blends past and present, it also cultivated a unique arts and tech scene, earning the name of City of Arts and Innovation. People from all over the country are drawn to Winston-Salem for a variety of reasons — vacation, historic research, foodie adventures, retirement, and much more.

A Religious and Hardworking Colonial Village

Colonial Salem was settled and founded in 1766 by Moravians, a group of hardworking and religious immigrants. Meanwhile, colonial Winston was land sold to the then-newly formed Forsyth County. Initially simply called “the county town” or Salem, it was bestowed the name Winston in 1851, after the Revolutionary War hero, Joseph Winston.

Modern Winston-Salem was created in 1913 when the two towns, which were only a mile apart, were combined. Even before the official merging, the two towns were already referred to as Winston-Salem during the 1880s by the U.S. Postal Service.

What Is Winston-Salem Known For?

Interestingly, one of the key things Winston-Salem is known for is its tobacco and cigarette industry. The city is fondly nicknamed the Camel City for the world-famous cigarette brand that started there in 1875.

The influence of the R.J. Reynolds Tobacco Company can be felt and seen throughout the city. Countless historic places and iconic landmarks bear the Reynolds name or were named for the family — from Reynolda Road and the Reynolda House Museum of American Art to the Reynolds Building. The company and its tobacco industry continue to dominate the city’s industry to this day.

So what else is Winston-Salem known for? The city has greatly diversified its industries to include beer brewing, textile manufacturing, technology, and more. Winston-Salem has also established itself as a major financial center in the East, with several banks choosing to build their headquarters there.

A Tale of Two Cities with Similar Names

Winston-Salem has enjoyed a fair amount of a fantastical and folkloric reputation due to the city often being associated with the infamous Salem witch trials. Contrary to what some fictional works and media may suggest, though, Winston-Salem is not the site of one of the largest and most notorious cases of mass hysteria in Colonial America.

The colonial Salem Village, where many were accused of being witches, is nowhere near North Carolina. It is now modern-day Danvers, Massachusetts — which is a good 12 to 13 hours away from the city of Winston-Salem, North Carolina.

A Quiet Yet Thriving City for Everyone

Modern Winston-Salem is a city that is synonymous with both modern technology and deep, rich history. Today, it is regarded as one the best places to settle down in the Greensboro Area, especially if considering where to establish your retirement roots. The city’s thriving and diverse culture, historic presence, and peaceful natural surroundings make it a truly amazing place to retire. To learn more about Brookridge Retirement Community and the flourishing lifestyle at our Life Plan Community, please contact us at (336) 759-1044.